The book follows Celaena Sardothien, a teenage assassin living in a corrupted kingdom.

After serving out a year of hard labor in the salt mines of Endovier for her crimes, 18-year-old assassin Celaena Sardothien is dragged before the Crown Prince. Prince Dorian offers her her freedom on one condition: she must act as his champion in a competition to find a new royal assassin.

Her opponents are men: thieves, assassins, and warriors from across the empire, each sponsored by a member of the king's council. If she beats her opponents in a series of eliminations, she'll serve the kingdom for four years and then be granted her freedom.

Celaena finds her training sessions with the captain of the guard, Westfall, challenging and exhilirating. But she's bored stiff by court life. Things get a little more interesting when the prince starts to show interest in her... but it's the gruff Captain Westfall who seems to understand her best.

Then one of the other contestants turns up dead... quickly followed by another. Can Celaena figure out who the killer is before she becomes a victim? As the young assassin investigates, her search leads her to discover a greater destiny than she could possibly have imagined.

Chaol Westfall retrieves Celaena from Endovier, the slave camp she has been imprisoned in for the past year. He presents her to Prince Dorian, who has summoned her to see if she would be suitable to compete for him in a contest his father is putting on. The contest is to discover the next King’s Champion, in essence someone to do the king’s dirty work. The king is a nasty, arrogant man who has been conquering kingdoms throughout Erilea. Also, he eliminated magic from his kingdom and other nearby lands ten years ago and punishes anyone who even retains books about the subject.

Celaena is a good candidate for the competition because she built quite a reputation during her past work as an assassin, perhaps the best in all the land. Her sharp mind is evident as she analyses the people and her surroundings as she’s being led by Chaol from the prison and subsequently questioned by Dorian. She finally agrees to compete and also agrees to use the alias Lillian Gordaina to try to keep her infamous identity hidden.

Celaena is in bad shape after a year of hard work in Endovier. It is hard to keep food down as she has been malnourished for so long, and she is thin and weak. Her beauty, which used to be a source of pride for her, was diminished by the harsh conditions at Endovier as well. But she is happy to be surrounded by rich foods and beautiful linens and clothes, all things she loved in her former life.

All of the potential champions train, dwell, and compete in the castle for thirteen weeks. Twenty-three other men in the king’s court were allowed to choose a competitor, and Celaena realizes that while many are inconsequential, several will be stiff competition, especially the giant and brutal Cain. He is competing for the king’s closest advisor, Duke Perrington. To be ready to beat these opponents, Celaena pushes herself through Chaol’s grueling training to regain her former strength and skill. Throughout the competition, the king commissions various contests among the potential champions. Chaol tells Celaena to stay in the middle of the pack. She usually holds herself back and can fulfill this request, but her bravery is displayed during one challenge in which she saves of the life of young competitor after he is sabotaged by Cain.

Evil things are happening in the castle as the contests ensue. One champion is turning up dead before each contest. They are being murdered and mutilated in a way that seems brutal and out of the ordinary. No one can turn up clues as to whom or what may be doing this, and Celaena starts quietly investigating on her own. One night she discovers the entrance to a series of secret passageways behind a tapestry in her room, and one passage leads her to a mausoleum dedicated to the first king and queen of Adarlan, Gavin and Elena. The ghost of Elena begins to visit Celaena in this room and in her dreams. She explains there is a clock tower on the castle grounds that serves as a portal between their world and dimensions beyond. She warns Celaena that something evil has entered the castle from this portal and she must discover who is controlling it. Elena tells her she is the only one who can put a stop to this beast and that she must do so before the portal is ripped open so wide that many dangerous creatures will enter their world.

As they each get to know her better, there are signs that both Dorian and Chaol are developing feelings for Celaena, although Chaol’s indications are much more subtle. Celaena is drawn to each for different reasons. Dorian’s charming ways makes her blush, they share a love of reading, they are quite attracted to each other, and they have fun together during his (chaste) late night visits to her room. On the other hand, Celaena is seeing Chaol’s strength and honor as they train together and as he performs his duties as captain of the guard. They are both strong willed and butt heads often, but there is no doubt that a deep bond is forming between the two. And there are hints that they are attracted to each other as well.

A turning point in these relationships is when Celaena shows up uninvited to the royal ball. She asks Chaol to dance and he refuses, and then she ends up dancing the night away with Dorian. Dorian follows her to her rooms afterward, and the two kiss several times. When she goes out on her balcony after the ball, Chaol is quietly watching from the shadows of the garden below and knows she’s thinking about his best friend instead of him.

During her weeks at the castle, Celaena meets two very different women. The first is Princess Nehemia, and the two become fast friends because they both feel like outsiders at the castle. Celaena agrees to teach Nehemia the common language of Adarlan in exchange for Nehemia teaching Celaena what she knows of Wyrdmarks, an ancient language with ties to magic. Despite keeping a few secrets from each other at first, their bond becomes strong over time. The other woman she meets is Lady Kaltain Rompier, a typical court lady who, even though she is in a relationship with Duke Perrington, has her eyes on Prince Dorian as a future mate. She senses the connection between Celaena and the prince, and this makes her despise Celaena.

Here and there, Celaena reveals glimpses of her true background to Nehemia, Dorian, and Chaol. She shares how her parents were murdered when she was eight and how a man named Arobynn Hamel took her in and trained her to be in his league of assassins. Her training was incredibly hard mentally and physically, but she excelled and became his star pupil and thus a skilled assassin. She tells how the love of her life, a fellow assassin named Sam, was murdered just before she was sent to Endovier. She reveals the horrible scars on her back from being whipped when she stood up to the guards in Endovier at different times.

Celaena eventually discovers that Cain is the one who has summoned the murderous creature from the portal. He locks her in the secret passageways with it, and Celaena rushes to the tomb to retrieve King Gavin’s famous sword Damaris to defeat the monster. The creature bites her before she finishes it off, but Nehemia finds her and heals her using Wyrd magic.

Celaena competes very well and ends up in the final contest against Grave and then Cain. At Duke Perrington’s and the king’s request, Kaltain spikes Celaena’s drink before a required toast with the king between the two fights. Celaena unknowingly ingests this poison before the final battle against Cain. This dulls her senses and makes it seem like it’s going to be an easy win for Cain. As she lays injured, Celaena first gets encouragement from Chaol from outside the ring. But it is Nehemia who rescues her by using Wyrd magic to summon Queen Elena to take the poison from her system. Even though her body is quite broken, Celaena manages to defeat Cain once the poison is gone from her system and is declared the winner. Cain tries to kill Celaena after his defeat, but Chaol sees it coming and kills him before he can get to her.

After her victory, Celaena is visited by Chaol, who is haunted by the fact that he killed Cain but is still glad he did it. Dorian comes in as the two of them are hugging and can sense that something more might be going on. Chaol abruptly leaves, and Celaena tells Dorian that she can’t be with him while serving as the King’s Champion. He wants to continue the relationship in secret, but she continues to refuse. She wants to remain good friends instead, and he agrees to this. Chaol comes to her room later looking for Dorian to apologize about what he witnessed earlier, and Celaena tells him that she ended things with Dorian.

The book closes as Celaena signs the contract with the king. He threatens to hurt Chaol, Nehemia, or even Nehemia’s family if she does not fulfill the contract. But if she serves him well for four years, then she will be free.

There are 55 chapters in total, plus a teaser for Crown of Midnight and two chapters from The Assassin and the Pirate Lord.

italian edition
Add a photo to this gallery 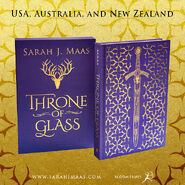 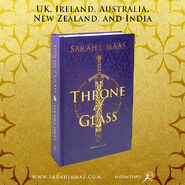 Add a photo to this gallery

Retrieved from "https://throneofglass.fandom.com/wiki/Throne_of_Glass?oldid=27681"
Community content is available under CC-BY-SA unless otherwise noted.