Sartaq is the commander of the northern armies, the rukhin, in the Southern Continent, and the second-eldest child of the current khagan Urus. He also holds the rank of Heir.

Sartaq was born into the Khaganate of the Southern Continent and spent his life vying for the throne. As a result, he never developed much of a relationship with his siblings as he knew he might someday need to kill them. When he was twelve, Urus took Sartaq to the mountain aerie and Sartaq snuck away and rode the captain's ruk. Urus was furious, and told him he should live among them as punishment for his foolishness.

Sartaq trained to ride a ruk thereafter, and later hatched and raised his own ruk, Kadara. As Sartaq grew up he felt more comfortable among the rukhin clans, and developed a friendship with the clan members. Due to his weak relationship with his mother, Sartaq came to think of his hearth-mother Houlun as more of a mother to him than the Grand Empress. His devotion to the rukhin clans later earned him the title of "The Winged Prince..[1]

Sartaq, following the death of his dear sister Tumelun, is present in his father's palace upon the arrival of Chaol Westfall and Nesryn Faliq. He stands by while his father speaks with them.

Later, Sartaq follows and introduces himself to Nesryn after he sees her exiting the palace armed. He gives her a tour of Antica and shows her his ruk, Kadara. He then gives Nesryn a ride on Kadara so they may speak freely without being heard.

Sartaq begins spending more time with Nesryn and they discuss the Valg. He decides to travel to the mountains of the rukhin to seek answers, and asks Nesryn if she would like to come with him. He is happy when she accepts, and reveals that he was praying she'd say yes.

Sartaq flies to the Tavan Mountains with Nesryn and after arriving at the Eridun aerie, he introduces her to his hearth-sister Borte and awaits the arrival of his hearth-mother Houlun. Away from court, Sartaq relaxes and trades banter with Borte. After noticing a stranger in the holdfast, Sartaq becomes suspicious and does not abate after the stranger introduces himself as a merchant named Falkan Ennar.

Sartaq takes Nesryn on a tour of his home while he waits for her to return. When she does, he listens to he tales of what she's found in ths mountains; the kharankui, the rukhin term for Stygian Spiders, have begun stirring and have stolen many ruk eggs and hatchlings. Sartaq decides they must fly to the other aeries and spread the word.

Houlun also tells the story of a Wyrdgate that opened in the Tavan Mountains millennia ago, before the Khaganate took over the Southern Continent. She reveals that the Stygian spiders are actually Valg, and that the Fae came to the Mountains thousands of years ago to teach the ruk how to fight them, and to establish watchtowers in the mountain ranges. Sartaq and Nesryn fly to the nearest one the next day to investigate it.

They explore the watchtower together, navigating the traps set by the Fae for the spiders. The watchtower seems to be deserted, until Sartaq and Nesryn are attacked by a lingering kharankui. They battle the spider but are no match for it, until a giant wolf leaps from nowhere and kills it. The wolf then changes into Falkan, and Sartaq becomes aggressive after Nesryn dumbly states that he's a shape-shifter. Sartaq refuses to help him, suspicious of Falkan, forcing the merchant to admit that he hasn't had the gift long and is actually what he claims to be. Sartaq is still wary until Nesryn snaps at him, and he fetches bandages from Kadara.

The trio fly back to the Eridun aerie and Sartaq storms off to have angry words with Houlun, who said that the watchtower was empty. She recalls some more stories and tells him of the Wyrdkeys and Maeve's use of them to send the Valg kings back to their realm. He deduces for himself that Erawan must have at least two Wyrdkeys already to be so powerful, and confronts Nesryn about her lying to him. They have a fight about the use of the khagan's armies against such power, and he informs her that they will be flying to the other three watchtowers once Falkan is healed, with Borte.

Falkan takes too long to recover, though, so Sartaq takes Nesryn to visit other aeries in the meantime, gathering support for the war. When they return to Houlun, she asks for a story. Nesryn sings instead, stunning her audience with her voice.

Falkan heals a few days later, and they start traveling to the various watchtowers. The search yields nothing. Back at the hearth Sartaq and Nesryn find Yeran and Borte arguing.

Sartaq is more informal, though not as much as his brother Kashin, and seems to not care overmuch about the throne but admits that he uses scheming sometimes to get what he wants. He pities his siblings for their loveless relationships, as he has Kadara who would die for him and who he would die for, but they have no one like that for them.[1]

Sartaq is a tall, handsome man with broad shoulders, and black hair and eyes. His brown skin is darker than his family's because of his time in the sky. Sartaq's hair is usually bound in a braid when flying. When unbound, his hair falls to just past his muscled chest. He has a solemn face. 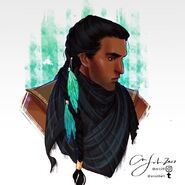 By Taratjah
Add a photo to this gallery

Retrieved from "https://throneofglass.fandom.com/wiki/Sartaq?oldid=25325"
Community content is available under CC-BY-SA unless otherwise noted.