Throne of Glass Wiki
Register
Don't have an account?
Sign In
Advertisement
in: Female characters, The Assassin's Blade characters, Queen of Shadows characters,
and 11 more
English

View source
watch 02:56
Doctor Strange in The Multiverse o Madness - The Loop
Do you like this video?
Play Sound

Lysandra Ennar Ashryver is the Lady of Caraverre, a former courtesan and a shifter. She is a viewpoint character.

Lysandra was kicked out of her home as a child after accidentally shifting into a hissing tabby in front of her mother. She spent days crying at her mother's door until she was threatened to be taken by the guards, forcing her to leave. Then, she spent her days surviving as different animals and begging for food as beautiful young girls. When magic was erased, she got stuck in the form of one of those beautiful young girls. Eventually, she was found by Arobynn Hamel and given to Clarisse DuVency. This meant that she was trained to become a courtesan.

When Lysandra appears for the first time she is paying a visit to Aelin's former house in Rifthold to inform her about Arobynn Hamel's plan. The young courtesan was a the time accompanied by a young little girl named Evangeline since she knew that Aelin wouldn't kill her in front of a child. Lysandra explains to Aelin the reason for her visit. She has come to give Aelin the details of the plan to save the young queen's cousin, Aedion, who is about to be executed at the celebration for the Crown Prince's birthday. Once she explains every last detail of the plan, the young courtesan starts talking about the past, revealing to Aelin things she wasn’t aware of. At the end of the meeting, Aelin and Lysandra conclude that there is no need for them to be enemies and that they both have been manipulated by Arobynn to dislike each other. Although Aelin is still skeptical of their newly found “friendship,” she begins to trust Lysandra and also grows to love Evangeline.

After a while, Lysandra visits Aelin's apartment once again to bring clothes for Rowan Whitethorn. Rowan, being able to track her scent, reveals that she is a Shapeshifter. Lysandra explains how after magic had vanished from Erilea, she was trapped in this form, and as a result of the years that had gone by she had completely forgotten what her true form was.

Aelin gives Lysandra a note saying, 'He's all yours,' allowing her to be the one to kill Arobynn. He lets her sleep beside him, and she slits Arobynn's throat.

Lysandra becomes a member of Aelin's court and aids Aelin in the war against Erawan. Notably, she shifts into a sea dragon to destroy Erawan's fleets and Maeve's armada. It is mentioned that before Aelin was kidnapped, the Queen of Terrasen wanted Lysandra to take her (Aelin's) form amongst her army and sire heirs with Aedion should Aelin receive the fate she'd expected, implying a romantic relationship between the two (Lysandra, Aedion) and that Lysandra was one of the few Aelin trusted most.

When Aelin is captured by Maeve, Lysandra shifts into Aelin to trick the new allies into believing Aelin is still with her troops and not captured. She does this to avoid conflict breaking out between the allies or potentially losing allies.

Lysandra continues her ruse of being Aelin while drifting away from Aedion, who is angry at her for deceiving and lying to him. She goes out on patrols and engages in battles, slowly exhausting herself until she slips up and accidentally reveals her true self to Aelin's allies. She attempts to defend Orynth against Erawan's hordes and almost dies, after which she and Aedion reconcile. When Erawan and Maeve are defeated, Lysandra takes her place as Lady of Caraverre. In the epilogue, she has married Aedion an unknown amount of time into the future.

The earliest depiction we see of Lysandra is a spoiled girl who always gets what she wants, along with frequently getting in the way of her "enemy," Celaena Sardothien. As the series progresses, however, she displays a sharp mind, courage, and kindness.

She has taken the small girl Evangeline under her wing, which makes Aelin begin to trust her again. Throughout the series, Lysandra proves herself to be a loyal and courageous member of the new court of Terrasen. She is fiercely loyal and very dedicated to creating a better world for Evangeline.

Lysandra is introduced as a stunningly beautiful curvy woman with dark brown hair reaching down her shoulders and back. Her skin is pale with emerald green eyes, full lips, and voluminous breasts (which she complains about because they are, according to her, very heavy and cause her back pain and don't serve well during fights.). After magic returns, they become much smaller.

During Empire of Storms she changes their shape, making them smaller. She also decides to wear her hair shorter, reaching just above her collarbone, and her skin becomes a sun-kissed tone. During Kingdom of Ash she chooses to wear her hair long again. One of her wrists was marked with Madame Clarisse's brothel sigil: a snake in midnight ink. The tattoo has been branded over after she gained her freedom back.

As a shapeshifter, Lysandra can take on any appearance she wants. However, her brand remains on her skin no matter what form she takes. Her actual appearance is unknown, as she has forgotten what she looked like, though she does describe herself as being rather plain.

Lysandra is a shapeshifter and can shapeshift into any animal or human that she wills. She prefers her ghost leopard form.

Lysandra has been seen as: 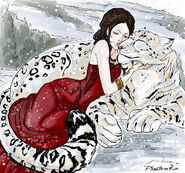 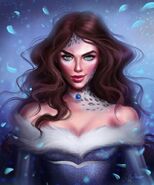 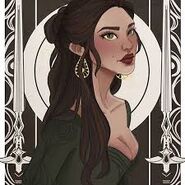