Before meeting Celaena, Dorian was a vain heartbreaker and a puppet of his tyrannical father. He was something of a flirt, but after his time with her, he departed from that lustful lifestyle, even turning down a party invitation from Aedion Ashryver. His true personality started to shine through.

Dorian is very compassionate. His sympathy for others heightens over time, especially after seeing the conditions in Endovier. This compassion, combined with outrage and blossoming courage, pushes him to stand up to his father and many other important officials.

Dorian is also bright, having a curious mind and a love of reading. He is adept at solving problems and will search for the answers to questions even if no one else can or will help. He also possesses a great deal of loyalty, as he goes out of his way and endangers himself to protect his friends. Similar to Aelin, he enjoys reading books, playing with his many hounds (specifically the puppies), and sword fighting.

Though as kind and the free-spirited man he may be, Dorian won't hesitate to show a fierce, cruel side to those who threaten him or try to make any dangerous moves on him. He is also someone who refuses to put up with people's problems if it means it will hurt him or others as well. It is demonstrated plenty throughout the whole series where Dorian puts people in their place whenever he needs to, whether it be Chaol, Manon, or even Aelin.

Dorian is tall (6'0) and lean, with raven-black hair. His eyes are a sapphire blue that Celaena describes as "strikingly blue, the color of the waters of the southern countries." Dorian has well-groomed dark eyebrows and is very handsome. After the Wyrdstone collar from around his neck was removed, Dorian has a permanent pale line on his tan neck.[2]

While forging the Lock with Aelin, he uses much of his magic before Aelin sends him back to their world. Dorian is left with his magic weakened and with a definite bottom.

Dorian first met Aelin when they were children, prior to the conquest of Terrasen. His memories of that meeting remained hazy, but he remembered her as a precocious, wild girl, who had asked her older cousin, Aedion Ashryver, to teach Dorian a lesson after he had spilled tea on her.

The two of them develop a bond during the royal tournament, and within this period of time Dorian shares a friendly relationship with her, showering her with numerous gifts: books, sweets, and a pet dog. They even share multiple kisses, although, in the end, Aelin rejects him, believing that they do not have any chances for a future, as Dorian is the Crown Prince of Adarlan.

Afterward, she and Dorian remain close friends. Each cares deeply about the other's safety, and they come to one another for advice.

Chaol and Dorian have been best friends since early childhood when Chaol had arrived at Rifthold with his father as the heir of Anielle. However, after Adarlan expanded their territories and the tribes of White Fang Mountains ceased to attack Anielle, Chaol's family was ready to leave back to their home. In order not to leave his best friend and Rifthold, Chaol decided to reject his noble title and was chosen to become the King's Captain of the Guard. Chaol has called Dorian his "best friend" and also said he loved him.

Sorscha had a crush on Dorian for six years, since she came to the Glass Castle, but she was certain that a relationship would never happen. However, Dorian took notice of her when he visited her to have some wounds bound. He recognizes her and asks for her name. When she tends another wound of Dorian's shortly afterward, he asks about her life, then sends a messenger the next day for tell him where her village was so he could mark it on his personal map of Erilea.

Sorscha later discovers that Dorian had magic powers and began helping him learn to control it. A relationship blossomed, and Dorian and Sorscha become lovers. Following the purge at Calaculla, Dorian, concerned for Sorscha's safety, panics and attempts to offer her money and supplies so she can flee, but Sorscha refuses, insisting that they stay together. Chaol and Aedion work on an escape plan for Dorian and Sorscha so they can leave the King behind together.

Eventually, Sorscha is revealed to have leaked information about the king to the rebels. Dorian attempts to bargain with the king for his lover's life, but the king callously beheads Sorscha, causing Dorian to fly into a fit of rage and grief and unleash his powers.

Dorian has a strained relationship with his father. For a long time, he disagreed with the King of Adarlan's brutality but remained silent so as not to anger him. One of the reasons Dorian yielded to his father was his desire to keep his spoiled brother, Hollin, from being named heir, as he believed Hollin would make a poor or even evil ruler, especially under the instruction of their father.

After the King's Tournament, Dorian begins to display some level of defiance towards his father. This attitude intensifies when Dorian, after a conversation with Nehemia, loses his temper in the council meeting about increasing the number of slaves in Calaculla and angrily tells the council that oppressing the conquered peoples will only spark more rebellions and create more rebel sympathizers. When Dorian learns of Chaol and Aedion's involvement with the rebel movement, he does not inform his father but tells the two men to leave him out of it.

While Dorian works with Sorscha to control his magic, romance blossoms between them - a romance that they must keep secret. After the slaughters at Endovier and Calaculla, Dorian begs Sorscha to leave the palace for fear of what his father will do if he discovers that Sorscha has been helping him, although she refuses to leave him. When the King discovers that Sorscha has been passing information about himself to the rebels, he orders Sorscha to be killed. Dorian screams in protest, and when Sorscha is killed, he loses control of his magic and attacks. The King then enslaves his eldest son with a Wyrdstone collar, which allows a demon to possess Dorian.

While Dorian and Georgina's relationship is far less strained than Dorian and the King's, tension still exists between Dorian and his mother. He attends her parties, although he finds them dull. However, he may do this out of decorum rather than actual desire to be with her. Dorian also disapproves of Georgina's spoiling of Hollin, as it feeds into the boy's unpleasant personality. To Dorian's frustration, Georgina pressures him to find a wife, even going so far as to have a list of eligible ladies composed for him. Nevertheless, Georgina appears to care for Dorian, albeit in a rather shallow manner.

Fleetfoot is the pup of one of Dorian's dogs, who escaped and mated with an unknown male to conceive the litter that produced Fleetfoot. Dorian originally plans on painlessly putting the pup down because of her antisocial temperament, but at Celaena's bequest, he promises to spare her life and find her a home. Dorian indeed places the pup in a home by giving her to Celaena as a Yulemas gift. When Celaena goes on her mission to Wendlyn, Dorian vows to look after Fleetfoot until she returns.

Manon, not knowing why she cares, visits Dorian after asking Asterin about love, hinting at a future romance between the two. The two later meet again and continue to tease each other, leading to a romance between them. After a few weeks of teasing, romance, and kissing, Dorian walks into Manon's room. Manon tells Dorian to "finish what he started". It is inferred that "what he started", was a night where they had kissed and Dorian had left saying "I'm not finished with you yet". Following, this, the two have sex. 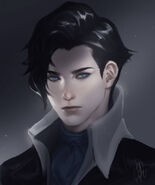 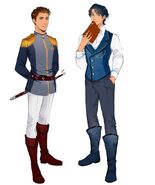 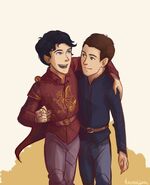 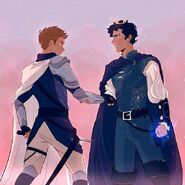 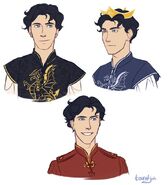 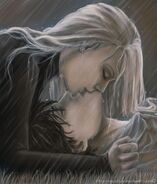 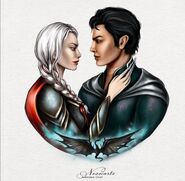 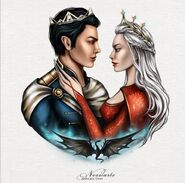 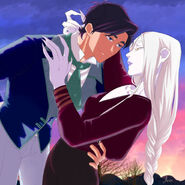 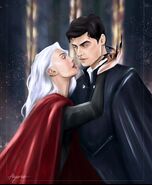 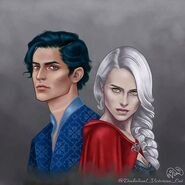 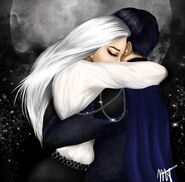 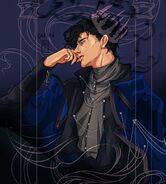 Art for Embers of Memory