View source
watch 01:36
We're Getting Mutants in the MCU - The Loop
Do you like this video?
Play Sound
Article
Biography
Relationships
Gallery

Chaol Westfall is the former Adarlanian Captain of the Royal Guard, and the Hand of the King to his best friend, King Dorian Havilliard, and he is the husband of Yrene Towers.

Chaol can be a cold figure to his enemies. But once he opens up, he can become a very sweet and kind individual. Chaol was one of the few people who is not entirely afraid of Aelin. He had always been suspicious of Aelin but seemed to respect her abilities. Chaol has been described to have a friendly but stern relationship with his guards, and they appear to trust and respect him. The person whom Chaol loves and cherishes the most is in his early life is Dorian Havilliard.

Chaol values his position as the Captain of the Royal Guard highly. He is extremely proud of his position and is shown to be competent.

After his injury, Chaol becomes bitter and depressed as he values his independence and cannot stand to be helped/babysit. He even goes so far as to throw his sword into the Avery as a sign that he is no longer who he once was. When under stress or in pain, Chaol's coping mechanism is exercise, combat, and pushing his body and muscles until they can't take any more.

Chaol exhibits signs of trauma, as he is haunted by the deaths of Nehemia Ytger, who he felt he could have saved, his men, who were tortured and killed, and Sorscha, who he watched be beheaded. Dorian's enslavement by his father after buying Chaol time to escape from Rifthold also haunts him.

Chaol is described as handsome in a rugged way with chestnut hair and copper-brown eyes. His hair is initially close-cropped but during the events of Queen of Shadows it grows out slightly, long enough for certain strands to reach his brow. Yrene describes Chaol as incredibly muscled and tall, he is in fact 6'1.

Chaol is an expert swordsman, having trained with the Adarlanian Master of Arms, Theodus Brullo, since boyhood. Chaol carries a finely crafted sword with the golden pommel in the shape of the flying eagle[2].

His skills are such that he wins the first time he and Celaena spar together. In a swordfight, he even can beat Dorian. His professional skills are outstanding: only Chaol is sent to watch Celaena while she is wandering around the palace site. In contrast, over ten guards are needed the prevent Celaena from escaping while she is staying in her own room.

Chaol has incredible strength and endurance as he has honed his body to perfection. His strength is such that he can move around and even mount a horse using only his arms. 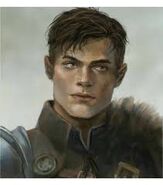