Abraxos was bred in the Northern Fang along with the other Wyverns. Because of his size, the handlers designated him as a bait beast, a wyvern used as a living practice dummy for the better-bred wyverns. Apparently, Abraxos was one of the oldest bait beasts in the Fang, having survived far past the life expectancy of the typical bait beast.

Abraxos first appears when the Ironteeth matrons, heirs, and their respective covens come to the training pit to select their mounts. The other wyverns repeatedly brutalize him, wounding him.

When Iskra pushes Manon into the pit, Titus turns on the Blackbeak Heir. Manon and Titus engage in battle, but Manon loses her grip on her sword, Wind-Cleaver, which lands a short distance from Abraxos. As Manon retrieves her blade, she meets the bait beast's eyes and sees that he has allied himself with her, at least for the time being, desiring revenge on the monster that has caused him so much pain. Together they drive Titus back; when the bait beast sufficiently distracts Titus, Manon begins running toward the mouth of the tunnel out of the pit but turns back. Realizing that the bait beast needs help, she races back toward the battling wyverns and slices through Titus's massive tail.

The bait beast seizes the opportunity and delivers the killing blow to Titus. Manon subsequently chooses the bait beast as her wyvern and names him Abraxos, after the serpent who holds the world in his coils.

Manon begins preparing him for training and has his broken teeth pulled and replaced with iron teeth, as well as iron spikes welded to his tail. She manages to obtain Spidersilk, which she grafts onto his wings to give them strength.[1]

Abraxos is a small wyvern compared to the other wyverns of the Thirteen. The wyvern handlers used him as a bait beast, leaving Abraxos with many scars from the brutal attacks of the other wyverns. The handlers also sawed off the venomous spikes in his tail to render him defenseless, and he had lost several teeth in fights and due to rotting; thus, Manon commissioned iron prosthetic spikes to be forged and grafted into his tail, as well as iron teeth to replace the lost and damaged teeth. Abraxos's wings had also been damaged from his years as a bait beast, leaving them weak and torn, so Manon obtained Spidersilk and had it grafted into his wings to reinforce them. Abraxos's wings now shimmer as a result. Abraxos's gray hide is mottled with black, brown, and green, and he has depthless dark eyes.

Manon is the rider of Abraxos. When Titus is set loose on Abraxos and Manon is pushed into the ring, he protects her from Titus. Over the course of their time together, Abraxos comes to care very much for Manon. 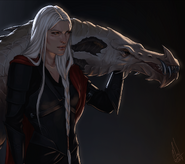 Add a photo to this gallery

Retrieved from "https://throneofglass.fandom.com/wiki/Abraxos?oldid=27926"
Community content is available under CC-BY-SA unless otherwise noted.